The House on Skelton Drive 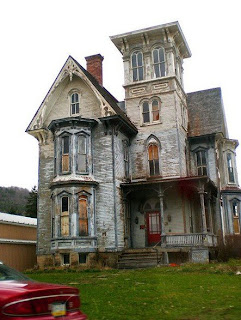 Although I've been given the address of the house on Skelton Drive, I expect something different for a professor's home, and as I park my red car at the curb, I sit there staring, thinking it must be a joke and maybe I should drive away, before I give somebody a heart attack from laughing too much.
This wasn't a fancy kept Addams Family home, although its architectural style was from the same era.
But this house has been a few years in disrepair, and I must give it its due, the thing looked haunted.
Why would Professor Nightshader reside in this hole?
Well, I must answer some of these questions, and the best way would be to go knock on the door and see who answers. If the Professor answers my knock, I'd have to put aside the idea it's a joke, because he wasn't the kind to joke. I've never met a more solemn kind of fella.

So I screw up my nerve and I walk to that red door, and I take the doorknob with the screaming skull and I rap three times. And then, I wait.
As the door creaks inward, there stands Professor Nightshader, and the sunshine falls inside the doorway. His mouth falls open and his shadow appears on the wall inside, upon another paneled door; a gigantic shadow of bat wings.
"Hurry and come in, the sun hurts my eyes," Professor Nightshader says, urgently. As a smell of something burning stings my nostrils. 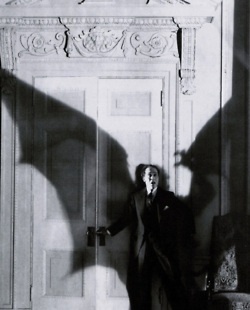 I look to my right, at the fence and see the Jack-o-lantern scarecrow protecting the lot...finding that about as disconcerting as the smoldering Professor Nightshader who has scurried further back into the darkened hallway, I'm really wanting to get the heck out of here, but I have a book report to deliver, since I missed turning it in earlier, and if I don't get it to him now, he had already said any reports turned in after October 31 would see their grade average drop a full 1/3, and that just seems unfair, but Professor Nightshader has a reputation of failing half his class because of steep rules which he won't bend if you break. 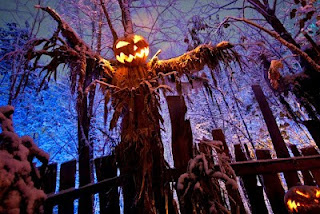 Inside, the professor has calmed sufficiently to welcome me, "Hello, Harry Cassetty, I'm glad you came, there is someone I've been wanting you to meet."
I handed him the report and said, "Here's my book report on Sabine's Potions and Illuminations."
"Excellent, I knew you would have it for me. You've been my favorite student this semester. So are you ready to meet Sabine?"
"Really, Professor, but she was burned in 1656."
"This Sabine is my niece."
"Oh, in that case, cool; I'd like to meet her."
I followed Professor Nightshader, as he scurried around corners that had been lit
by candlelight inside globe-shaded candelabra  making that eerie bat shadow appear to be scampering over the walls sometimes ahead of us, sometimes behind us, sometimes skittering over our heads... 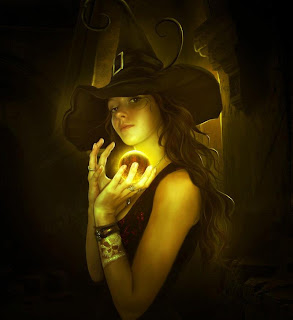 Finally, we reached a door and the professor calls out, "Darling Sabine, we have a guest; I'd like you to meet. May we enter, dear?"
"Please, do,"  a musical tinkling voice answers, young and sweet it sounds.
We go in. The chamber is all rosy, with a large fireplace and a black kettle bubbling over the flames, but the smell is one of vegetable soup cooking, not some icky potion made of questionable ingredients. And I realize I'm very hungry. The girl stirring the pot with a long ladle, smiles over her shoulder; she's bathed in a golden light, her face is beautiful, long hair to her waist, a pointed leather hat on her head.
"Hello, Uncle Gill, and this is Harry? Hi, Harry, will you have a bowl of my stew?"
"I'd love to try it, Sabine. It smells wonderful."
"You're not afraid to eat witch's stew on Samhain?" Professor Nightshader asks me?
"Not if it is made by Sabine." I smile.
"Take your seat at the table. And eat all you desire."
I sit down and so does the professor. 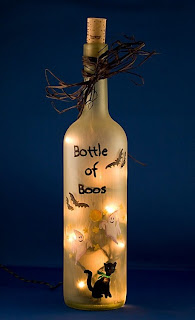 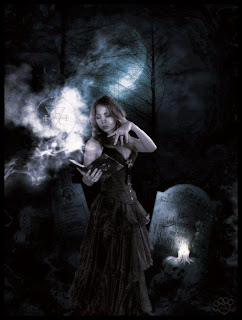 As I take up my spoon, ready to dip into the rich, full bowl of vegetable stew, a bottle catches my eye, that sets in the center of the table; a bottle of boos; sparkling lights twinkle inside, a black cat and ghosts and bats were painted on it. There's a cork in the top, and as I lean closer I hear 'boo, booo' coming from within.
"It helps set the mood," the professor says.
"I catch them in the cemetery three doors down," Sabine explains.
"I go down there at midnight and release them, with the promise that next year, they can come back to visit with me again."

"Oh, so do you conjure them with your book of shadows? And are you any kin to your name sake?" I ask, deciding this soup is more turnip than potato and it has more pepper than salt; my sinuses are starting to stream and I wish for a tissue to blow my nose, but there's nothing, not even a napkin.

"Yes to both questions," Sabine says, stepping over to me, she holds out an apple that shines so bright I can see our reflection mirrored up-side down on its skin.
"Have an apple on me, deary." She says, but I shake my head.
"Too bad, your loss," she says, and hands it to her uncle.
I watch as he opens his mouth to bite, and I see the fangs.
"Oh, I'm a fruit-bat, not a vampire bat." He says, "I live on fruit pulp and veggies...blood gives me indigestion."

Sabine says, "Are you drowsy, yet, Harry?"
I'm nodding, my eyelids very heavy.
"Excellent," her words, this room, and my two hosts are growing distant, fuzzy...the last I hear is this, "The stew's potent...you will sleep a sleep like the dead." Her laughter's no longer twinkly but raucous like the squawk of a crow.

I waken, sitting in my car, as the sun rises higher over the roof of the decrepit house...I must have slept all night here, my neck creaks and I feel very stiff.

At school, when I walk into class, a man I don't know sits on the edge of Professor Nightshader's desk.
"Hello, you must be Harry Cassetty; I'm Mr. Binder...I'm the new teacher for the rest of the year, taking over my predecessor's caseload."

"And what happened to the professor?"

"No one is quite sure, but he was found in the yard of his home. He was burned severely, parts of his limbs had disintegrated into dust..they found your report there in the leaves. Was you the last to see him alive?"

I look at the people staring at me.

"I've not talked to anyone; so maybe I'd better not say anything, in case the police want to talk to me."

The class is a blur. I remember little because half way into it the police come in and I leave with them; I heard the class muttering behind me. "Did Harry kill Professor Nightshader?"

All I could tell the cops was what I have told here; and as to how the professor ended up out by the scarecrow, partly burned to a crisp and the rest of him dust, I can't say, nor why I was back in my car, or what happened to the mysterious Sabine.

But I do know this, if I ever meet her again, I'm telling her she sure can make a mean pot of stew.

Wayahowl and JD
We are the writing duo of Snowhawkwaya aka Snowhawk and Windhawk, and we express much of our concerns in our chants and poems, which will be posted here for reading. We have seven eBooks for sale